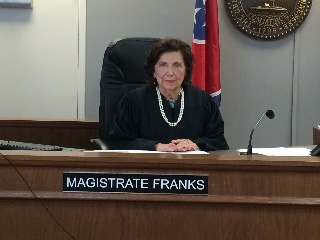 Jane C. Franks was appointed by the Governor of Tennessee to serve as the General Sessions and Juvenile Judge in Williamson County in 1977, a position she served for nearly 20 years. Judge Franks’ years of experience and love for children brought her out of retirement in July of 2014. Franks was appointed by Judge Sharon Guffee to be a part time magistrate of the Williamson County Juvenile Court.

Jane C. Franks’ journey as a judge started when her oldest daughter asked her where she went to college. During this time Jane didn’t even have a high school diploma and realized that in order to inspire her children to seek an education she must set the example first. She immediately took the GED and enrolled in Peabody College. She received her undergraduate degree in Elementary Education and graduated from the Nashville School of Law in 1971. At the time Jane completed her undergraduate and law degrees, Judge Franks had eleven children with her husband J.N. Franks Jr. By the time she was practicing law she had a total of twelve children.

Judge Franks set the strong foundation on how juvenile court is run today in Williamson County. During her tenure on the Bench, Judge Franks received numerous honors and awards. She was instrumental in founding the CASA program and the Alternative Learning Center which provides continuing education for students unable to attend regular school for brief periods of time.

Judge Franks continues to play an active role in her community and the St. Andrew’s Lutheran Church in Franklin where she and most of her family have been charter members since 1975. Her husband passed away in 1992 and she still resides in Williamson County. Jane C. Franks continues to set the example of hard work to her 12 children, 33 grandchildren, and 28 great grandchildren.